"I'm Carrie Wells. Only a few people in the world have the ability to remember everything - I'm one of them. Pick any day of my life, and I can tell you what I saw or heard: faces, conversations, clues; which comes in handy when you're a cop. If I miss something the first time, it's okay. I can go back and look again. My life...is unforgettable."
—Carrie's intro in Season One

Carrie Wells is the lead protagonist of the TV series Unforgettable. She possesses hyperthymesia, a rare medical condition that gives her the ability to remember all she has seen or heard. After her sister died, Carrie became a cop for the Syracuse PD and tried to solve her murder. Following the case being shut down, she gave up and retired from the job, moving to New York City. Almost a decade later, after witnessing a murder, she is convinced by her ex-boyfriend Al Burns to come back on the job.

Little is known about Carrie's childhood. She was born to her mother, Alice Wells, and an unknown father. Carrie also visited her Aunt Edie once in a while. She also grew up having to deal with the loss of her older sister Rachel.

In high school, her fellow students nicknamed Carrie "Scary Carrie", possibly because of her condition or her sister's murder or both.

From '97 to '02, Carrie worked for the Syracuse Police Department and spent much of that time trying to solve her sister's murder. Originally partnered with a lazy cop, who took all the credit for the cases they worked on together whereas Carrie was doing all the hard work. However, another cop, Al Burns, then decided to make Carrie his new partner. And along the way, not only did he help her with her sister's murder case, but they were romantically involved for a period of time.

After her sister's murder investigation was shut down due to lack of evidence, Carrie wanted a new and different life than what she had. As a result, Carrie broke-up with Al, resigned from her position with the Syracuse PD, and moved to New York City. While in New York, Carrie had a difficult time trying to put her past behind her and fell into depression. She then sought help from a scientist named Eugene who helped Carrie during her period of depression. After a while, she eventually worked through her depression with the help of Eugene.

Since then, for the almost decade off the force, Carrie had put her past behind her, especially volunteering at a hospital. However, in the Pilot, she is unexpectedly reunited with her ex-boyfriend and partner, NYPD Detective Al Burns (Dylan Walsh) when he asks her for help on a homicide case involving her neighbor. Being back on the job after a break feels surprisingly right for Carrie. Despite her conflicted feelings for Al, she decides to permanently join his unit as a detective solving homicides - most notably, the move allows her to continue to investigate the unsolved murder of her sister.

Carrie is the daughter of Alice Wells and the younger sister of the late Rachel Wells. She also has an Aunt Edie.

An enigmatic former Syracuse, New York police detective, Carrie Wells has hyperthymesia, a rare medical condition that gives her the ability to visually remember everything she has seen, heard, or experienced. This rare condition makes her memory so flawless that every place, every face, every date and time, every object, every event, every conversation, every moment of joy and every heartbreaking incident is forever embedded in her mind. It's not just that she doesn't forget anything - she literately can't, no matter how much she may want to and no matter how hard she tries. However, there is one thing she cannot remember: the details that would help solve her sister's long-ago murder. Her ability is very helpful to investigations she and her team are conducting. 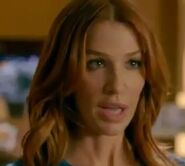 Add a photo to this gallery
Retrieved from "https://unforgettable.fandom.com/wiki/Carrie_Wells?oldid=4698"
Community content is available under CC-BY-SA unless otherwise noted.